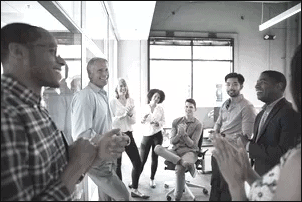 What is gender equality? Asking this question at a dinner party could bring the whole party to a screeching halt, as people start arguing about gender, pay equity, and why women do the majority of the childcare. Your business can’t fix the world’s problems (and just what those problems are is debatable depending on whom you ask), but you can make your workplace a better place for everyone.

Please note, you can’t say, “Hey we want our business to be more female friendly, so we’re going to implement special benefits for women.” This won’t work legally, ethically, or motivationally as a way to deal with your workforce. You need to implement these actions across the board (with the exception of maternity leaves, which have biological implications).

But on Aristotle’s view, the lives of individual human beings are invariably linked together in a social context. In the Peri PoliV he speculated about the origins of the state, described and assessed the relative merits of various types of government, and listed the obligations of the individual citizen.

Working from home meant we could vary snack and coffee breaks, change our desks or view, goof off, drink on the job, even spend the day in pajamas, and often meet to gossip or share ideas. On the other hand, we bossed ourselves around, set impossible goals, and demanded longer hours than office jobs usually entail. It was the ultimate “flextime,” in that it depended on how flexible we felt each day, given deadlines, distractions, and workaholic crescendos.

There are many variations of passages of Lorem Ipsum available, but the majority have suffered alteration in some form, by injected humour, or randomised words which don’t look even slightly believable.

Harvard Economics Professor Claudia Goldman finds that one of the reasons women earn less money than men do is that they strongly prefer temporal flexibility over salary. That is, they are willing to turn down higher-paying jobs because those jobs come with more demanding hours or less predictable hours.

Now some jobs just don’t have temporal flexibility. If you’re a neurosurgeon, you can’t run out of surgery to go to your child’s parent-teacher conference. Once you start that surgery, you’re there until you finish. If you’re a tax accountant, you will work long hours during the tax season. But, that doesn’t mean that most jobs can’t have some temporal flexibility worked into them.

While women are more willing to make less money in favor of more flexible hours, men like flexibility, too. Implement policies that allow people to work from home—either full time or from time to time. Establish core business hours and then let people pick their schedules around that schedule.

This recommendation may seem to fly in the face of the previous suggestion, but different workplaces have different needs. If you run a retail or restaurant business, people can’t work from home and having someone cut out in the middle of a shift for a personal emergency takes a toll on the other employees. So, you need to have people on site when you need them.

Women, as noted, are often the primary parent—which means they are the ones who handle childcare, dentist appointments, and meetings with teachers more often than men. They need to know their schedules in advance to plan these things out. Otherwise, they have to either shuffle child care or call out with short notice.

Having a set schedule (or at least a predictable one—Steve always works Monday, Tuesday, Thursday, and Saturday, and Jane always works Wednesday, Friday, and Sunday), can help give everyone in your business a chance to succeed without sacrificing home and family to do so.

What would happen if you posted everyone’s salaries in the break room? Would you experience widespread complaining or would people shrug and go, “yeah, that sounds about right?”

The United States (and many other countries) have traditional cultural restrictions on discussing pay. Companies consider that pay is confidential information (even though the National Labor Relations Act preserves the right of employees to discuss workplace conditions, including pay), and people consider it rude to discuss. So, the end result is, almost no one talks about salary.

Employees should, though. And, no one is cheated by an unfair salary when the employers are open about what positions pay. Think about it: what if when you received a job offer, it didn’t just say, “salary: $50,000 per year, paid bimonthly” but gave you a list of your new coworkers’ salaries along with their titles?

You would lose all claims of gender pay discrimination because the only way gender pay inequality can happen is when the information is kept behind closed doors. If you knew, before taking a job that Bob, Steve, and Carl each earned $60,000 for the same job that the company is offering to you for $50,000 you’d say, “How about $60,000?” and you’d walk away if they said no.

So often, people are promoted to management jobs based on their stellar performance as an individual contributor. That’s fine. It’s pretty standard. But, managing people isn’t like doing the work (although most management jobs have an awful lot of doing in addition to the managing). In order to make your workplace comfortable for men and women, make sure your managers are trained in how to manage.

Why? Because a manager can make or break a company. Your managers need to know relevant employment laws. For instance, you can’t punish someone for taking FMLA time—whether it’s for a broken leg or a new baby—and you can’t treat people differently based on gender. You need to reward employee performance, not time in the seat, and you need to offer feedback to everyone.

Most bad managers aren’t bad people; they are just poorly trained. Get every manager trained and hold regular refresher courses so that your company is a great company to work for, in every department. Great companies attract great people, male and female.

Make Things Equal but Not the Same

Sometimes managers think that they have to treat everyone in an identical manner. If Jane gets five M&Ms, then John better get five M&Ms as well. While this philosophy works in preschool, it’s not the way to approach management. When Jane asks for a more flexible schedule, don’t deny it because John doesn’t have one.

If you’re ever in doubt about whether or not you can legally do something, double check with your employment law attorney. Remember, it’s cheaper to ask a question before than it is to pay the same lawyer to help you out with a lawsuit.

Men and women want to work for great companies. Make yours great for all employees, and you won’t have to worry about gender equality problems in your workplace.

Suzanne Lucas is a freelance journalist specializing in Human Resources. Suzanne’s work has been featured on notes publications including Forbes, CBS, Business Insider and Yahoo.